Anybody here have a favorite character form their story that's not the protagonist?

If so, have you made that more character prevalent in that story than originally anticipated?

He's the hardheaded idiot who likes to brute force anything. I have a lot of fun messing with him at times in the story.

Wanders into the administration office she works at regularly with diabolic laughter, threatening others with man eating fishes and pursuing her lollipop addiction.

My favorite character is the one in my pfp. I went a bit too hard on his backstory because I enjoyed writing about him so much. However, because I shone the spotlight on him for too long I had to write him out for around a 100 pages. If not then the story wouldn't have progressed the way I wanted it to.

The One who has the Eyes

Definitely Harmony, the succubus that lives with the MC. She has to be one of the most complex characters I've written yet, which some people probably won't know until much later. And I mean much later. So much later that its probably going to be a few months until her story gets in the depths of depravity, savagery, and all around desperation and terror.

FGCCheckmate said:
If so, have you made that more character prevalent in that story than originally anticipated?
Click to expand...

The guild girl in this https://www.scribblehub.com/series/290604/storyfire-classic-i-update-this-everyday/

My favorite character from my story is actually one of the antagonists. He is a mysterious bounty hunter only known as "The Fire Mage" who is hunting down the protagonist. Was Divided By Zero: Looking for Glovebox Jesus

Handsome Jack from the 'Borderlands' series.

Hands down my favorite villain.

Not for stories I'm writing. For those I tend to be more careful, do more editing, and have a more cohesive narrative that focuses on the strong points of the story.

For stories I make on my head though? Oh yeah, it happened a lot of times, especially if I keep on creating the story for a long while.

Like... For a Slice of Life modern day story I was creating, the adopted little sister of the MC became much more relevant than the MC herself.

There were also a dozen or so stories made back when I was really into shounen, that focused on male main characters, but always turned the focus to the Female Leads at some point... Until I eventually realized I liked writing female characters a lot more, so I stopped making male protagonists.

I have this character called Drew Zimmerman (aka Glitcherman) that is the most obnoxious, hated character in the original 'game' that the story is set in. He's just so! convenient! for comedy! and super silly, so he's like my favorite cameo character lol

And no, he doesn't appear more prominently because of this-- he's like seasoning, so for him to have a better impact I need to use him sparingly hehe

I don't pick favorites. I love them all equally, but in different ways.

FGCCheckmate said:
If so, have you made that more character prevalent in that story than originally anticipated?
Click to expand...

Not exactly "more than originally anticipated" since I laid their roles out as early as the planning stages, as well as how prevalent they will be. I have largely stuck to those plans.

If I were to pick, though, I found myself wanting to give focus and screentime on the character Kenji Saito from my story in the future. Maybe some "schoolmate sidestory volumes" in the future.

He's the student council president (first appears formally in volume 3) who's a voice of reason and a loud, "cool big bro" type with an interest in technology. Yet he's also aware of his own selfishness and the self-serving nature of his position and tries to make up for it by being friendly and caring to other students. He more or less serves as an emotional anchor for the protagonists in the decently little screentime he has. He does play a big role in the planned final arc though.

Crimson Queen of the Night

Its probably Sei Ueno, the childhood friend of the deuteragonist. I originally wanted to write her down as a tall, tan-skinned delinquent but i changed it into a yandere ojou-sama type.

She was prevalent in the Disappearance arc but not that much in the Magazine arc. She's the daughter of a Yakuza chairman that dumps huge amounts of donations in the school, she goes in.

Departure of Motivation led me to want water

I love making a mess to his reborn life.

At first he really thought he was the mc

Too bad, he's just a side character.

Needs chocolate to get through the day.

...At this point you could say it's a flaw of mine to put too much stock in side characters. Even a character that exists purely to advance the story will have their own personality, motivations, and goals.

Probably the most egregious examples of this don't exist in published stories though.

The first was 'Noble Girl'. She was the older sister of the MC's love interest, but she ended up being the key piece in bringing together the beast kin tribes and the human kingdoms during the end war. She didn't even have a name...

The second was a princess of a fallen kingdom who ended up becoming the avatar of a newborn goddess. She was just a decoy the MC used to mount a resistance against her boss, who was a stereotypical evil demon lord...

The third and last I'll mention was 'The homunculi swarm'. An alchemist MC made a hidden world which was staffed by Homunculi modeled after herself. Eventually she died but the hidden world continued on, with each generation of Homunculi inheriting the memories of the MC and every homunculi that came before them. I put waaay too much effort into it, and the sad thing is I never wrote any of it down.

Yes, between the main heroine and the (supposedly) sexy headmistress.
Prevalent... I don't think so, or at least that's how it is last time I checked; the main heroine is doing just fine, while I feel I didn't (can't?) write enough of the headmistress to be considered a serious contender.

The god who slept in during the big day of killing a hundred people to then summon to their world to gain energy to save their world, who was going to be stoner who is made of stone, but is now just big only stone giant who is always tired, and if gotten of hold of weed, would be even fun’er.
-
And is super mega ass virgin to romance to sex-mance. Has a psycho spirit friend who want to kill all women or anyone who gets close to him. Also-also he was so bored of stuff that he decieded to start with messing with (Will)(Soul energy) and is pretty much a adoptive-father to way to many kids.


Did all this in like 2/3 plus a few thousand years of Earth creation.


Im a fan boy to him

2021 said:
The god who slept in during the big day of killing a hundred people to then summon to their world to gain energy to save their world, who was going to be stoner who is made of stone, but is now just big only stone giant who is always tired, and if gotten of hold of weed, would be even fun’er.
-
And is super mega ass virgin to romance to sex-mance. Has a psycho spirit friend who want to kill all women or anyone who gets close to him. Also-also he was so bored of stuff that he decieded to start with messing with (Will)(Soul energy) and is pretty much a adoptive-father to way to many kids.


Did all this in like 2/3 plus a few thousand years of Earth creation.

This was all written like a fan girl buffing up all their favorite boy accomplishments
Last edited: Feb 26, 2022

Lüd. Part of the harem in the smut series I'm writing right now.

Unpredictable, thrill-seeking, suicidal, masochistic, and chaotic, through and through.

Not only for her personality, but for her potential in the story too. Since her motivations are scattered, literally anything can happen under her will and it can snowball to some really good scenarios I can write my characters into.

Her R18 scenes are also fun to write, as in she's the only character where sex gets physically violent and bloody and no one bats an eye due to how I introduced her in the story.

Right, and she's also a beastkin. 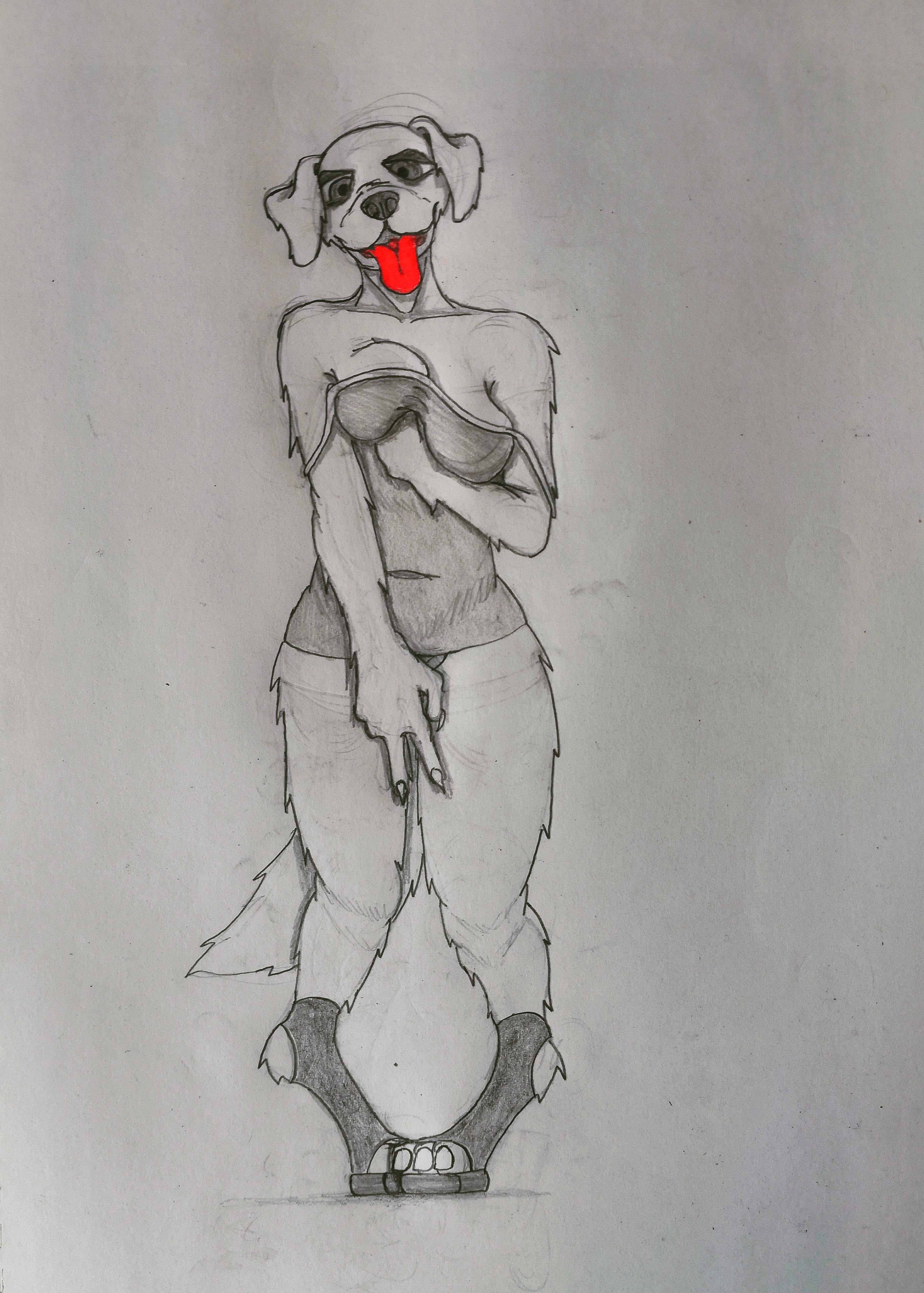 All the degeneracy rolled into one.

My type of flavour.

Little Hans. Started off as just an introduction of what would happen to animals that survived a Rift. Ended up stealing the show in several important fights, providing comfort and healing, not to mention a warm and funny element.

When I Got Reincarnated As A Spider With My Goddess - VOLUME 4 : CHAPTER – 4 AN ADVENTURER’S PERIL | Scribble Hub