Im looking for novels where the mc has a bloodline that gives them powers. An example would be warlock of the magus world with his snek bloodline and the wizard world with harpy bloodline.

If you havent read these, then what I mean by bloodline is that the mc is the decendent (or has been transplanted) of a monster/strong person and said bloodline gives them powers. They would progress along strengthening the bloodline and get more powers but would hit a bloodline limit which the mc will eventually find a solution for. These bloodline users would normally be a lot stronger than cultivators/magus'/wizards of other paths but have that limit of power as a tradeoff.

Also please tell me if its translated, original, or original but like an actual book.
T

few i can think of are:
sorcerer's journey - instead of bloodline which exists in the universe mc takes parts and implants them (translated)
Age of Adepts - like ^^ mc takes demons heart and slowly changes to an elemental etc (translated)
large chest - systems novel where mc starts as a monster and evolves kind of like bloodline (original)

Well, I sorta have something resembling a bloodline system in my own series actually. It is a kinda complex cultivation power system largely based in a more western fantasy magic setting, there are some cultivations such as elemental, natural, and bestial schools which belong to the chaos branch, others such as tier magic and formula magic which belong to the order branch. The order branch can basically do everything the primordial and natural schools can do, except more controlled but less powerful. Progress is slower, but it's far less risky and at higher levels the order branch enables cooperation and coordination far more than the chaos branch does.

And then there are bloodline magics which are essentially a bloodline that allows you to more quickly learn a very narrow cross-section within the order-branch magic. It kinda functions like a D&D sorcerer. Each bloodline has 1 innate ability in addition to the sub-section of order-type magic that can be learned very easily.

An example of this, elves have a bloodline called "the green word," which allows them to utilize natural magic as though it was tier magic. It also grants an innate ability to communicate with tree spirits. Basically, bloodline magic stands in both branches of magic but belongs to neither. And, the only way to have a bloodline is to be born into it. (With a single exception in-world, that exception happens to belong to the MC's twin sister who is a reincarnated goddess and managed to replace her natural bloodline.)

There are also demonic bloodlines which give some greater degree of conscious control over elemental magic. The innate ability of demon bloodlines is the ability to see in the dark. Female dark-elves actually are the single most versatile demons because they have bloodline ability with all 4 basic elements. Yes, dark-elves are demonic type elves.

I don't really have much in the way of the concept of a bloodline limit planned, and it reads a lot more like your typical western fantasy with some collorings of your typical Isekai (and, yes, the MC and a few members of the main cast are all reincarnated persons from Earth.) Basically, if I would have to describe it, I'm going for a feel rather similar to Mushoku Tensei.

So, although the concept of bloodlines exists in this series and is utilized exactly as you describe with the exception of the whole bloodline limit thing, I would say it doesn't completely fit what you are probably expecting here. That said, if my description peaks your interest anyway, it would be great if you could check it out. 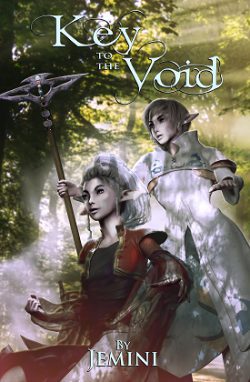 Key to the Void: A self-made isekai

Asaren and Tiaren are the first Elven twins to ever be born. This phenomenon, normally thought to be impossible and only seen in humans, was caused by something unusual that happened at the end of each of their past lives. In order to save his grandaughter, a man sacrificed his...

divine throne of primordial blood could be your thing? (mc has a mixed bloodline so he doesn't gain any special ability. anyone that has a pure bloodline gets the ability of the bloodline(higher purity better thingy)) big brain mc. science his way through cultivation.