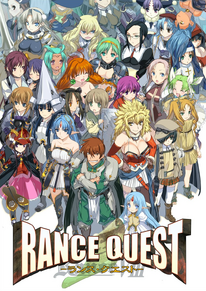 ABOUT
Rance Quest occasionally referred to as "Rance VIII," is the 11th game in the Rance series, released on August 26, 2011.

Unlike its predecessor, Rance Quest is not a strategy conquest game—instead, it is a role-playing game similar to Rance VI, but tweaked to include features from Sengoku Rance and Toushin Toshi 3. It includes 3D graphics for both dungeon exploration and enemy display in battle, using a first-person view battle system. It's, in many ways, opposite to VI's system, which used 1st person dungeons and 3rd person battles, and that limited the number of battle characters could be used, whereas Quest limits the number of times characters can use their skills.

Just like VI, it includes a huge cast of characters from all the previous installments, as well as some new, all with different classes that allow customization in the way they level up. The cast is even bigger than VI's but, dividing the characters into classes, also makes some fairly similar to others at the end of the day.

The plot of Rance Quest is pretty simple, straightforward, and lacks a relevant plotline that ties the events to the overall saga since, while it does have the main plot, the game is mostly about Rance taking up different quests from all over The Continent. It is much more character-focused than plot-focused and it is likely that, since it's the last game where the focus on several minor characters can be given, the main intention was to cover or finish many secondary sub-plots of many different characters and give them a proper conclusion.

On 13 Jan, an expansion with new CG and missions was announced, which released on 24 Feb 2012. This expansion is called Rance Quest Magnum. This version has since been updated with additional content from AliceSoft, both in form of official patches and unofficial add-ins and mods from AliceSoft staff.

The expansion expands the storyline a lot and fixes a lot of gameplay issues the original Quest had based on the player's feedback, vastly improving the experience. With the expansion, it properly feels like a full entry to the series, with Rance actually facing a major threat this time and properly adding more to the plot, along with better tying with Rance IX. While the expansion was released later, it's very easy to guess that it's how the game was intended to be released and that the original was rushed.

An official translation has been released by MangaGamer on February 25th, 2021. 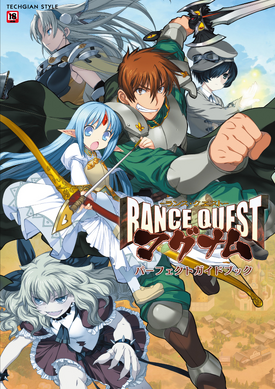 Rance Quest follows where it left off after the events of Sengoku Rance. Rance leaves JAPAN along with Suzume with the objective of visiting Pencilcow and request the Kalar for help with the curse that keeps his slave Sill Plain encased in a cube of unbreakable ice. Rance starts living in the new city founded by Copandon called CITY, where Rance just slacks off for a while, sometimes taking cheap missions. He saves a common girl called Sachiko Centers from monsters, but in exchange turns her into his new slave to replace Sill.

A few months pass with them just playing around until he finally decides to visit the Kalar in order to have H with the Queen Pastel Kalar, and ask her about Sill's curse "while he's at it". However, upon interrupting and H-ing the Queen during a secret ritual, she places the dreaded Morurun Curse on him, which prevents him from H-ing women under level 35.

From that point, Rance adventures literally all over The Continent for various purposes while looking for a cure for Sill's curse and his own, but over the course of the game, he will be forced to fight against many odd turns of events that are secretly manipulated by a dark organization.

COMMENT
The wait is finally over for the English translation. Yay, partay!

I thought maybe I'd add my own opinion about the game since I just finished it.

The game is pretty short. For me, It took 16 hours to finish the game (+overall completion = 35 hours) so it got me disappointed once I immediately realized that I have beaten the game after the Tower of Babel. The savepoint is okay but sometimes, unreliable. I can say that it's good they made a backup for the save because when you're inside a dungeon, saving suspends the game and you have to open it up again to continue (So, if you experience blackout... my condolence). The combat mechanic is the same as Evenicle and it's pretty smooth and simple. Also, they really killed most of the girls in the story (R.I.P Suzume, Millie, and other girls) However, the story is top-notch (set aside the H) and you can't disagree unless you haven't played the game yet. Overall opinion of it? Do I even have to say it? All Rance games earn an SSS+ plus for me.

It was fun playing the game! I am excited for Rance IX!

(Rance being a mature person) 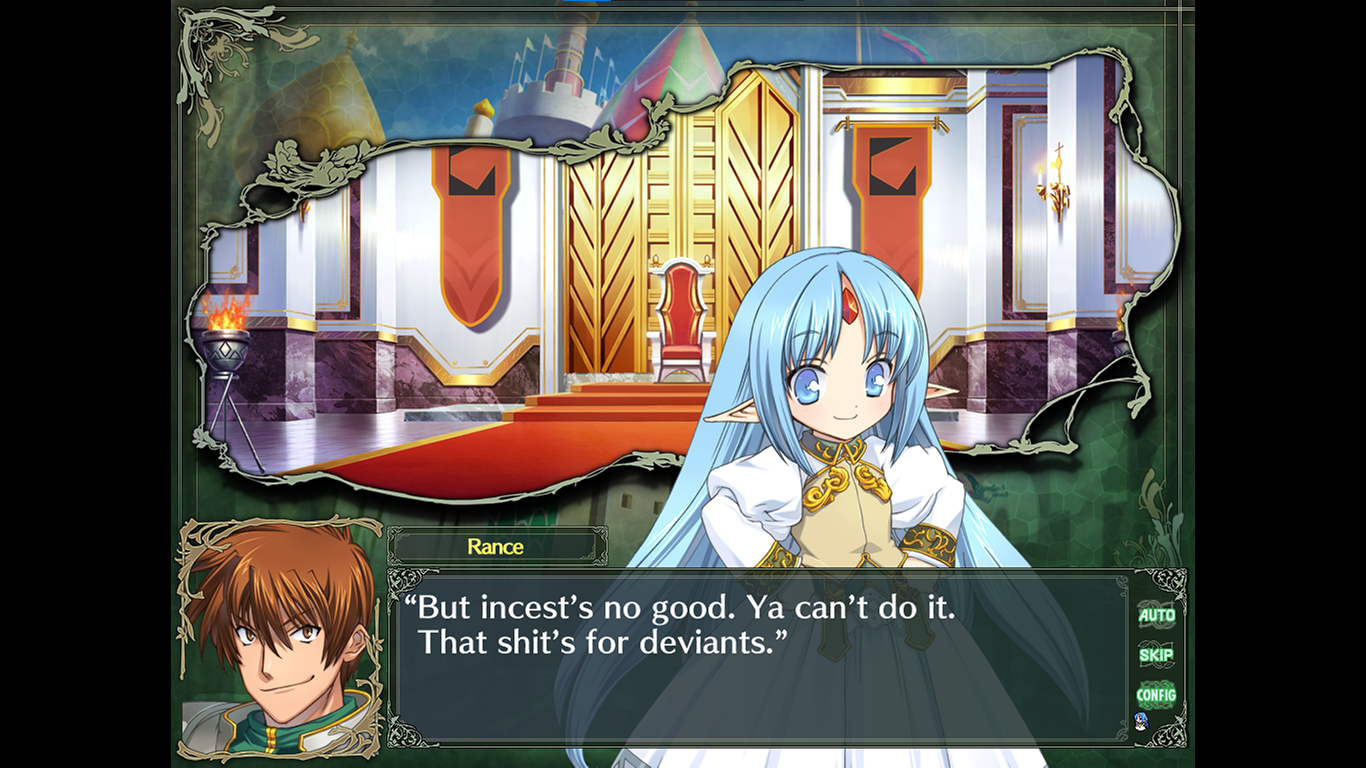 Which is weird considering AliceSoft then made Evenicle, which is about marrying your two sisters.

Which is weird considering AliceSoft then made Evenicle, which is about marrying your two sisters.
Click to expand...

I call it playing "both sides"

I just finished yesterday defeating the true final boss no spoiler but I really suggest you to get 2 healers with over 900 magic and lvl42 to survive with rance at least over lvl50 with S tier armor.

Anyways is really great game and both ending do delve in rance character development.

But it made me laugh on several occasions showing such level of maturity and reading and throwing it all away a second later.

xluferx said:
I just finished yesterday defeating the true final boss no spoiler but I really suggest you to get 2 healers with over 900 magic and lvl42 to survive with rance at least over lvl50 with S tier armor.

Anyways is really great game and both ending do delve in rance character development.

But it made me laugh on several occasions showing such level of maturity and reading and throwing it all away a second later.

I finished the game three weeks ago and I agree on an extent about how Rance Quest Magnum is a great game with a promising ending that fuels us to want to know more about what will happen next! (Rance IX will soon be released!) It also had this humor that potentially heightens the atmosphere and avoids certain awkwardness and dullness.

Ah yes, your advice is pretty much the basic thing to beat the final boss. Although, I prefer the Uesugi family w/ Crook Mofus and Rance or Kenshin, Rance, Uesugi, Suzume, Crook Mofus. Beating the final boss with some of my team being under-leveled did sound ambitious but it's not impossible and I actually did it! In addition, I did not have any S armor, but I did have Rance's S weapon.

I think you can't really beat the final boss by having only LVL 42 (Suzume is an exception because she has 100% magic resist and 35% damage reduction) and magic damage deals little damage than poison and fighters. I tested Torako Uesugi against the final boss and it didn't work, sadly.

Rance truly is the best father... in a sense.

(Katsuko and Torako can gain big exp when at the party together so it's usually two of the best carry.)


(Preferred to have Dark Resist+ and removing all Standby skills because it is useless against the final boss.)