Edit: The solo piano ost in TLOH IV is so addictingly brilliant! Damn, I can't get enough.
Click to expand...

Nahrenne said:
I only care about Crow.
'-'

But he's so fun and smexy and charismatic and handsome and clever and amazing.
'-'

Nahrenne said:
But he's so fun and smexy and charismatic and handsome and clever and amazing.
'-'

JUST FINISHED IT! THE TRUE ENDING IS DAMN AMAZING! I'll be sending some screenshots later of some moments.

[MY THOUGHTS]
Trails of Cold Steel IV is truly the beginning of the end before the REAL beginning of the end. In addition, it doesn't follow the same slightly incorrect foreshadowing like Trails of Azure, CSI and CSIII - which references KeA's said branches of different possible outcomes in this world. But, it continues where we left off in Trails of Cold Steel III, just like how CSI continued its ending in Trails of Cold Steel II without any foreshadowing. I know, CSII and CSIV have the same similarities but without the school setting and the new Class VII trying to face their greatest problems and the old Class VII who already faced their greatest trouble... well, some didn't.

Atelier Ryza may be a fast-paced JRPG, but it can't match the soundtrack, the difficulty, the costumes, and the most broken character, Rean. Even at the highest difficulty, or even just the HARD difficulty, I can confidently say that CSIII and CSIV are two of the easiest games I have ever played and used all of my time.

The dungeon designs are pretty industrious and eye-catching, the soundtracks from every open field to dungeons are tempting me to dance and hyping me up for every boss battle that awaits, and of course, the boss themes are so DAMN good, to the point that I stopped moving just to dance like that (one dance instructor... that meme though). The splitting-up-the-party cliche back from Trails in the Sky III, which really makes me anxious, because I am not used to other characters I haven't used. Well, I do get used to using them though. And last but not the least, the TRUE FINAL BOSS battle where you can switch to two other parties (it's not the same as the three-party group where you lower the boss' health before the next group)... damn, it was at that moment that I thought of how amazing that boss battle was.

The normal ending's ending also baffled me because I thought it was the real ending until it showed me that I could tread a new path to the true ending... thank god, I did all the sidequest in the finale, or I couldn't have gotten the real ending.

[BROKEN BUILD]
Anyway, as you can see, this is the ultimate build for Rean if you want the best full damage (but big delay), the best CP generator with no CP recovery and CP-turn accessory, and the ultimate ailment provider. If you mathematically add everything, from Rean's DEMON UNCHAINED, 3998 (with all STR droplets given), STR or CRIT ORDERS and Minotauros +ATTACK/CRAFT damage... you'll get the best damage.

Guaranteed HIGH-DAMAGE CRAFT = TRUE HELIX! This is the Level 10 MINOTAUROS!

You'll get about 300,000 damage (only attack without critical, ORDER, and not using craft with Minotauros).

1,500,000 (with Laura's 60% damage ORDER, critical hit, and spamming True Helix using Chrono Burst (that is, assuming, you have the CP-turn accessory) and also, LA FORTE L+ STR and lowering the enemies' defenses) However, the 1,500,000 damage can be lowered down from the enemy defenses or increase out-of-nowhere. In addition, give General Le Guin a gift back in Mishelam and she'll give you an STR+400 accessory. 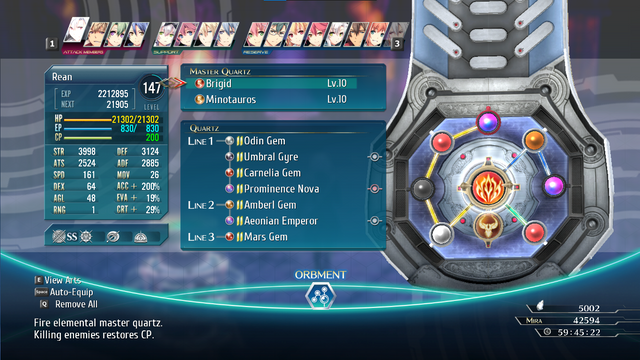 I've also built Musse has a support/high magical damage character. Giving him, two of the important Lost Arts, while the Grail Thelas is unused. It was supposed to be for Duvalie, my fourth main character, but I didn't know she was unplayable in the last dungeon. Seriously, just make sure Musse has Deus Gem and Diabolos Gem, so he can keep on spamming support ARTS like Adamantine Shield and Crescent Mirror. Of course, there are other bosses that ignore AS and CM. Musse also is important for her Sapphire Girl craft because of Rean's DEMON UNCHAINED side-effect. 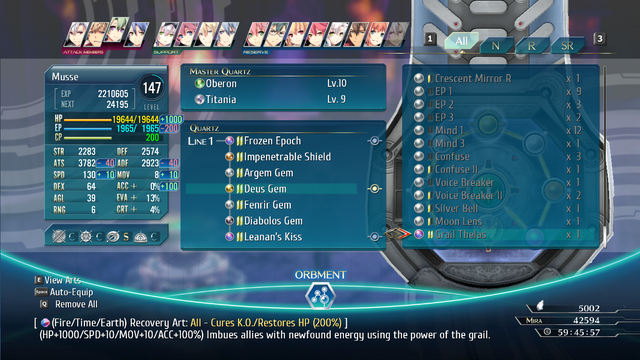 However, when it comes to Gilliath Osborne and McBurn, you'd better pray to yourself you won't have to spend all your time retrying because the two of them are a complete NIGHTMARE! And I am telling you, if you fight them, be prepared!

[FISHING]
These are three of the best fish that I actually caught... now then, can you break my world record? 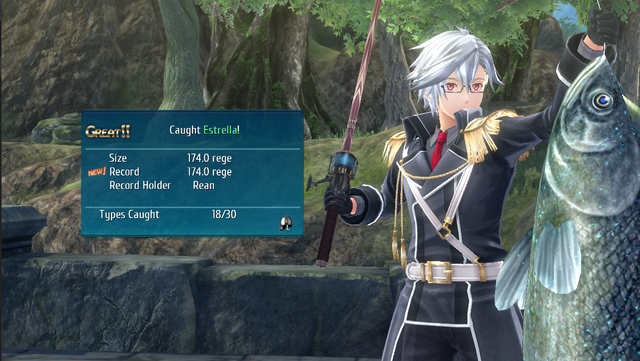 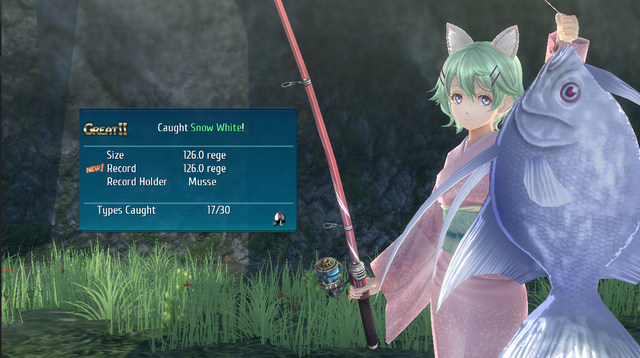 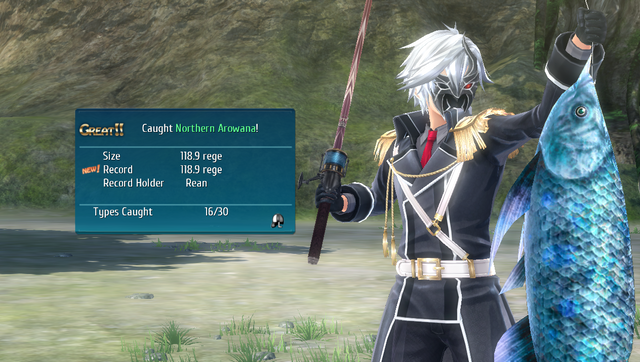 I just wanted to say that fishing really is entertaining in its own way, especially when you get the largest ones out there... though, you can get few fishing spots with only one great fish from certain character interactions. Damn, I thought this game was a fishing simulator... oooh boy, I was wrong.

[ARCUS II MINIGAME]
Pom! Pom! Party! is also the second most entertaining game than VM and Casino Gamblings because it is like Tetris with powerups and stuff. Here is the list of opponents I've beaten (Renne is difficult... but beatable. I dunno 'bout the others.): 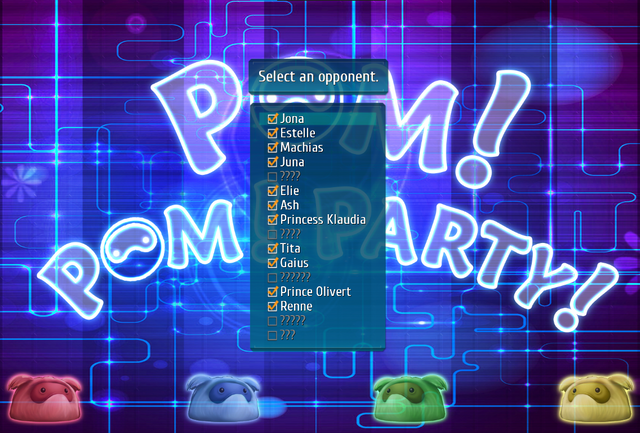 [BONDING EVENTS]
The bonding events are unlike any other this time! The person who you bonded with and chose will become your partner at the end of the Erebonian ARC! Not only that, the bonding events are... some damn fine love story - never in my world had I ever had to become the third wheel and watch two-person go at it! The bonding events aren't about having to know each other anymore, it is the next step to it! In addition, I theorized that in every different world, Rean has gotten out with a girl, but I dunno in Hajimari no Kiseki. I think it'll go through the route where Rean is still a virgin chad.

By the way, I chose Towa because I am faithful to who I started from CSI. It was also to reference, respect, and give farewell to TOKYO XANADU EX where Towa actually existed there. TOWA! GO GET EM, GURL! XD 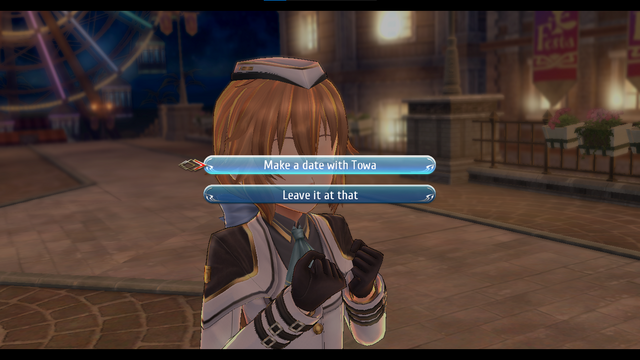 Crow is a pretty considerate and savage student, though, also an antagonist (who lived his life for the purpose of revenge). He may have left school and lived his life to the very end, but at that very end, where he lied, was the beginning of his life. Crow just doesn't really die, does he? He became an immortal after he died, he lost the rivalry and was about to disappear but didn't because of Valimar, and he was about to disappear after the final true boss battle, but a miracle brought him back. Let me say one thing, 'CAN YOU LET THIS DEAD MAN DIE IN PEACE ALREADY?!' but that would be sad if he did. DAMN LOVE THIS MAN! 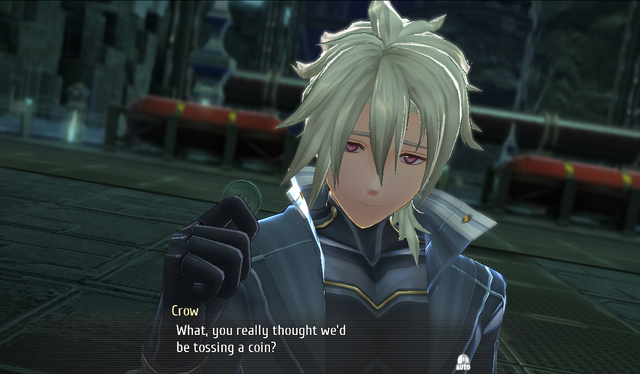 Also, Kevin Graham, Ries Argent, and Zin Vathek... can I play them in the next sequel? I really like them.

THIS THREAD IS FINISHED AND COMPLETE! 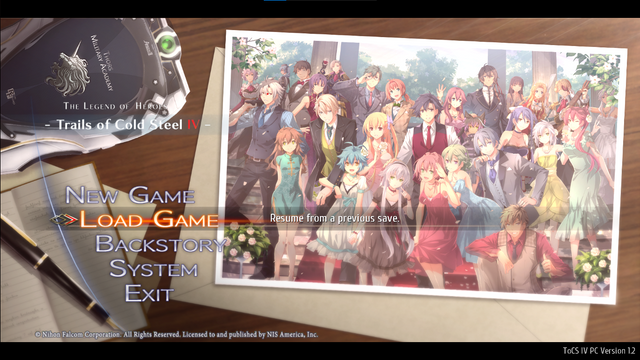 HandsomeProtagonist said:
Crow is a pretty considerate and savage student, though, also an antagonist (who lived his life for the purpose of revenge). He may have left school and lived his life to the very end, but at that very end, where he lied, was the beginning of his life. Crow just doesn't really die, does he? He became an immortal after he died, he lost the rivalry and was about to disappear but didn't because of Valimar, and he was about to disappear after the final true boss battle, but a miracle brought him back. Let me say one thing, 'CAN YOU LET THIS DEAD MAN DIE IN PEACE ALREADY?!' but that would be sad if he did. DAMN LOVE THIS MAN!
Click to expand...

QwQ
I hadn't finished the game yet...
But I'm glad to know my best boy lives.
>w<